Founder of TV ministry SAT-7 releases ‘Dare to Believe! Stories of Faith from the Middle East’ on network’s 25th anniversary

EASTON, Md. — A veteran Christian media pioneer who lived through rocket attacks and car bombings in war-torn Beirut, Lebanon, says Christians in the Middle East have never been more willing to risk everything to put their faith on display. 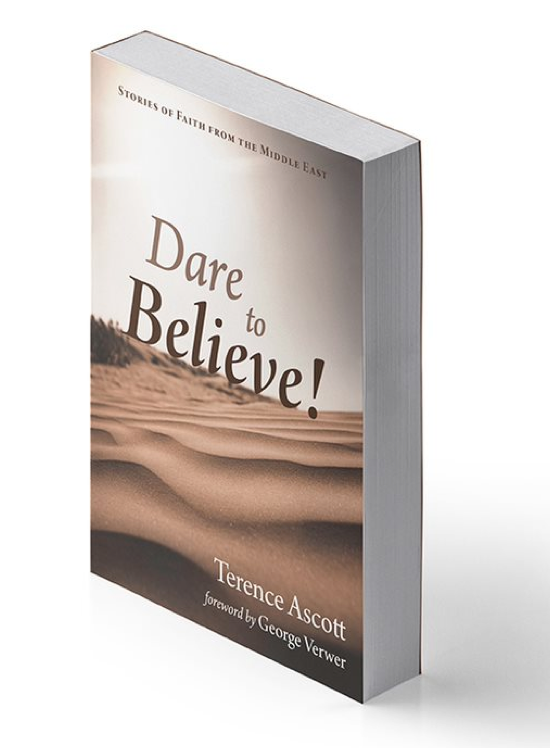 After decades of isolation and “underground” church meetings, Middle East Christians are now using the latest “uncensored” technology to show millions across the war-torn region what it means to be a follower of Jesus Christ, says Dr. Terence Ascott, founder and former CEO of Christian satellite television ministry SAT-7 (www.sat7usa.org) and author of a new book, Dare to Believe! Stories of Faith from the Middle East.

Dare to Believe! launches today as the Holy Land conflict continues to unfold.

In the book, British-born Ascott tells how SAT-7’s one-of-a-kind television ministry — under the leadership of local Christians — mushroomed into one of the Middle East’s most-watched networks since the first broadcast exactly 25 years ago this week.

50 Years of Faith in the Middle East

“During my nearly 50 years in the Middle East, I’ve witnessed massive change, starting with the Iranian Revolution and going on to the rise of the so-called Islamic State,” said Ascott, who was forced to evacuate his family from Lebanon when civil war erupted in the mid-1970s.

“I’ve seen disinterest in the Gospel to outright hostility toward it, and also the passionate embracing of Christianity and the daring courage of Middle Eastern believers,” he said.

Inspired by the sight of children in Egypt huddled around a black-and-white television set by the roadside, Ascott launched SAT-7 in 1996, initially broadcasting in Arabic from low-budget studios.

At one point, the television ministry — funded by donations — was so popular in Egypt that when its studios were partially destroyed in an arson attack in 2002, local widows offered to sell their wedding rings to help it stay on the air.

Hosted by local presenters, SAT-7’s shows now reach more than 25 million people across the Middle East and North Africa in three regional languages — Arabic, Persian and Turkish — proving hugely popular even though less than 4% of the region’s population is Christian.

Part of SAT-7’s universal appeal across different religious and social backgrounds is its focus on “real people living out their faith,” giving viewers hope in adversity, war and disaster.

“Our goal was — and remains today — to make God’s love visible to everyone,” said Ascott, who re-lives nearly a half-century of fascinating experiences in the book, providing his own insights into evolving ministry and faith in the Middle East.

Over the past 25 years, SAT-7 has beamed uncensored faith-based and educational shows directly into homes across the Middle East and North Africa — an unstoppable ministry that’s kept going through wars, political turmoil, national disasters, and the current pandemic.

Advances in technology — including video-on-demand — have given the ministry opportunities to reach millions more people on their smartphones and other digital devices — as well as connect personally with thousands of viewers via social media and online chat.

‘Explosion of Interest’ in Christianity

“We’ve seen an explosion of interest in Christianity in places like Iran, Iraq and Afghanistan,” Ascott said. “Social media and phone apps like WhatsApp and Telegram give us a direct line of contact with millions of young people across the Middle East and North Africa, clamoring for hope and asking: ‘Who is this Jesus?’”

George Verwer, founder of Operation Mobilization — one of the largest-ever global Christian mission movements — described Ascott’s book as “super relevant,” saying it would help people “understand some of the historic background to the region and see the amazing faith of our brothers and sisters under persecution.”

For more about Dare to Believe! Stories of Faith from the Middle East, visit the website at https://www.terenceascott.com/dare-to-believe.

Terence “Terry” Ascott has lived in the Middle East and served as the leader for indigenous media ministries for nearly 50 years. In 1973, British-born Terry moved to Beirut, Lebanon, and launched an Arabic Christian publishing ministry. After civil war broke out there, Terry and his family evacuated to Egypt where he started an Arabic-language Christian youth magazine distributed in more than a dozen Arab countries. In 1996, he launched SAT-7 (www.sat7usa.org) — the first Arabic-language Christian satellite television channel.

Launched in 1996, SAT-7 (www.sat7usa.org) — with its international headquarters in Cyprus — broadcasts Christian and educational satellite television programs, and online media programs, to more than 25 million people in the Middle East and North Africa. Its mission is to make the gospel available to everyone, and support the church in its life, work and witness for Jesus Christ. SAT-7 broadcasts 24/7 in Arabic, Farsi (Persian) and Turkish, using multiple satellite channels and online services.

PHOTO CUTLINE: DARE TO BELIEVE: A veteran Christian media pioneer who lived through rocket attacks and car bombings in war-torn Beirut, Lebanon, says Christians in the Middle East have never been more willing to risk everything to put their faith on display. Dare to Believe! Stories of Faith from the Middle East — a new book launched today — tells how Christian television ministry SAT-7 (www.sat7usa.org) mushroomed into one of the Middle East’s most-watched networks since the first broadcast exactly 25 years ago.