More than six out of 10 churches see offerings decline to varying degrees in lockdown; National Association of Evangelicals to share ‘Bless Your Pastor’ campaign to assist pastors and church staff

A new “State of the Plate” poll involving more than 1,000 churches across all 50 states shows that more than six out of 10 churches have seen a decline in offerings since the coronavirus outbreak began.

The news comes as the National Association of Evangelicals (NAE) — a national organization serving 40 denominations and representing 45,000 churches — prepares to launch its annual Bless Your Pastor campaign, encouraging congregations to “show and share God’s love” for pastors and church staff.

Conducted April 8–20, 2020, the State of the Plate constituency-based survey of leaders from over 1,000 churches revealed 65 percent have seen giving decrease since mid-March as churches stopped holding in-person services.

“For pastors and church staff, there will be difficult days ahead as more church families are laid off or experience reduced incomes,” said Brian Kluth, who originally launched the State of the Plate research following the 2008 financial crisis. Kluth is also the national spokesperson for Bless Your Pastor.

The State of the Plate poll, organized by Kluth with the participation of organizations such as Christianity Today’s Church Law & Tax and NAE Financial Health, revealed:

Giving decreases in churches will likely lead to tighter church staffing budgets. The NAE’s Bless Your Pastor movement (BlessYourPastor.org) equips congregations to show appreciation for their pastors and church staff in creative ways.

Churches are encouraged to share “50 Creative Ways to Bless Your Pastor” — a list of practical ways to show pastors and church staff that they’re appreciated. Churches participating in the campaign will be able to request a grant-funded $250 Amazon gift card for their senior pastor.

Kluth said, “Having been a pastor myself, with three children and a wife who needed major medical treatments, I understand the financial struggle so many pastors and their families face and the tremendous difference it makes when a congregation shows their pastor they are there for them all the way.” 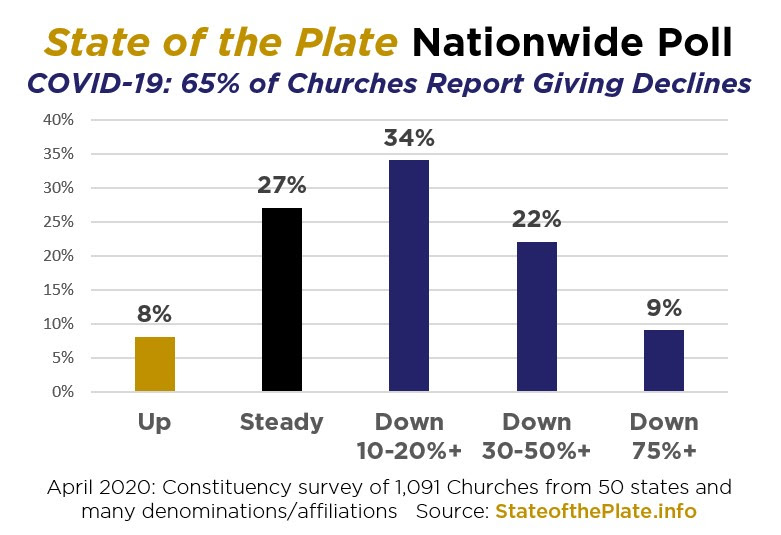 Media Interviews: Brian Kluth is a seasoned media spokesperson on church giving and pastor compensation. Kluth’s State of the Plate research and Bless Your Pastor work has been featured by CBS, NBC, FOX, CNN, NPR, USA Today, Washington Post, WORLD and many other media outlets.

To arrange an interview, contact: Brian Kluth, national spokesperson for Bless Your Pastor, at BKluth@NAE.net or 719.930.4000.

About National Association of Evangelicals:

Founded in 1942, the mission of the National Association of Evangelicals (NAE) is to honor God by connecting and representing evangelical Christians. The NAE includes more than 45,000 churches from 40 denominations and serves a constituency of millions.