5 Biggest Stories That Captured the Attention of Christians in 2015

Police shootings, terrorist attacks, a refugee crisis—2015 offered no shortage of events to lament. It also gave us reasons to rejoice: three American friends thwarted a terrorist attack on a train in France, and China announced the end of its one-child policy. There were also stories to make us giggle, like those liberated llamas that galloped through an Arizona suburb and into the annals of Internet fame. 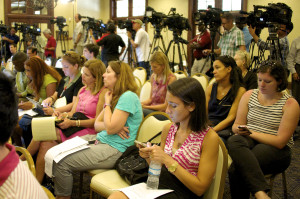 Yes, there were plenty of news stories—tragic, triumphant and trivial—in 2015. But what stories caught the attention of Christians? What events made followers of Jesus pause and reflect?

The Pope’s September visit to the U.S. was highly anticipated, and it didn’t disappoint. Pope Francis, who has a 70% favorability rating among all Americans, made news with a series of unscripted gestures, including an unscheduled visit to the Little Sisters of the Poor and an impromptu blessing of a 10-year-old boy suffering from cerebral palsy.

Some American Christians see the Pope’s popularity as an opportunity to build bridges between Catholics and Protestants. Kenneth Behr, founder of Faith Dialogue and author of Roaming Catholics, believes the key is fostering mutual understanding. The InChrist Communications client’s book is a resource to help build that understanding. “There are many people with Catholic backgrounds, family and friends in our evangelical churches, and many of them have significant questions that are unanswered.” Behr’s goal: to remind people “that the Christian faith is not grounded in denominations, but in the life, death and resurrection of Jesus Christ.”

The radical Islamic group ISIS was in the news all year, especially after a series of attacks in Paris that left 130 people dead in November. Jim Denison, author of Radical Islam, exhorts Christians to understand the threat posed by ISIS while refusing to give into hate. In an autumn interview posted by InChrist Communications, Denison says, “We’ve been taught by radical Muslims to hate Muslims. That is a satanic strategy to fear the people we’re supposed to love. Be loving of Muslims, and see friends and neighbors as an opportunity to influence an entire Muslim culture.”

Undercover videos released by The Center for Medical Progress showing Planned Parenthood executives discussing the sales of aborted fetuses shocked the conscience of the nation. The backlash was swift, with millions calling for legislation to halt the flow of taxpayer dollars to Planned Parenthood.

In the wake of the scandal, the pro-life Hope Pregnancy Centers of Brazos Valley purchased and repurposed a former Planned Parenthood abortion clinic in Texas. Tracy Frank, Hope Pregnancy Center’s executive director, in a press release crafted by InChrist Communications, said, “What was once a place of death and grief where an estimated 6,400 abortions were performed has been transformed into a place of life. We feel like we have reclaimed and redeemed the ground.”

On June 26, the U.S. Supreme Court released a landmark ruling that effectively legalized same-sex marriage in all 50 states. While some Christians celebrated the ruling, many others bitterly opposed it.

The decision also ignited debate about religious liberty and raised questions about the ruling’s ramifications for churches and other Christian organizations. In a July InChrist Communications blog post, Palmer Holt counseled Christian leaders to consider how the ruling affects the mission of their organizations, and then to “share that information with your board of directors and employees.”

He also advises preparing for media scrutiny. “A media outlet is likely to ask for your organization’s position on same-sex marriage … prepare that statement now and practice being interviewed.”

A long-running, brutal civil war in Syria has caused approximately 4.3 million Syrians to flee their country. While debate rages about how to handle the flood of refugees, one missionary couple decided to do something tangible.

In a Christian Post guest column placed by InChrist Communications, The Mission Society (TMS) missionaries Charlie and Miki Chastain recalled, “When the crisis became world news, we packed our family into our minivan and drove roughly 2,000 miles from Estonia to help.”

Their time at the refugee camps had a profound impact on them. “The opportunity to look into the eyes of the refugees and to see without a doubt that these are sons and daughters of God—it has changed our perspective on everything,” they wrote. Though Charlie and Miki acknowledge the work is “costly, and exhausting, and painful” they report it was well worth it “to experience the love and compassion of the Father for every single one of His precious children. It helps, too, to remember that Christ was a refugee.”

As we look ahead to 2016, all we can predict with certainty is that it will bring stories that make us giggle, events to lament, but also reasons to rejoice.. And that InChrist Communications will be ready to help Christian organizations effectively communicate their messages. If you have programs or projects that need branding, marketing, advertising, public relations or social media/digital support, please contact us at 704-759-6192 or click here for a free strategy session. 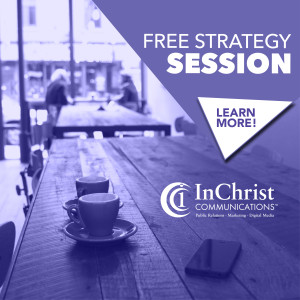 About the Author
Palmer Holt, founder and CEO, is an award-winning communications professional with more than 25 years’ experience in journalism, corporate and agency public relations, marketing and advertising.
Social Share