by Palmer Holt
hard news, newsjacking
Comments are off 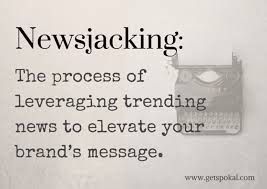 Hard news press releases have a much better chance of being picked up by media outlets than feature stories.  They are objective, straight-forward and time-and-date sensitive.  But important or interesting hard news can be difficult to find for most non-profits.

David Meerman Scott, the original guru of newsjacking, defines it as a process “by which you inject your ideas or angles into breaking news, in real-time, in order to generate media coverage for yourself or business.”

Fueled largely by Twitter, newsjacking jumped to the forefront during the 2013 Super Bowl in New Orleans. When an unimaginable power failure occurred as the year’s largest television audience watched, Oreo cookies quickly newsjacked the occasion. With a picture of an Oreo cookie under a spotlight, copy in the photograph said, “You can still dunk in the dark.” The Tweet was, “Power out? No problem.”

The Oreo turned a negative — the disrupted Super Bowl — into a positive. They didn’t belittle the city of New Orleans for the power failure. Instead, they took a clever approach with a nice touch of levity.

Perhaps what was most impressive about the Oreo response was that the incident was unpredictable, and the brand managers responded almost instantly with quality content.

On the tenth anniversary of 911, InChrist Communications (ICC) managed publicity for the release of Jim Denison’s book “Radical Islam: What You Need to Know.” Denison explained why Muslims hate Americans and how that emotion contributed to the 911 atrocities.

Because 911 was in the news, and Denison had a new book on the subject, he was in great demand for interviews and talk shows appearances. ICC secured almost 300 media hits during the campaign, with 230 radio stations also participating in a book giveaway promotion.  ICC also secured a permanent column for Denison with The Christian Post.

A non-profit organization can utilize newsjacking by monitoring breaking news — local, national or international — that may have a connection to its mission. But successful newsjacking will require two things: capacity and empowerment.

Do you have the staff and social media skills to pull off a quick newsjacking? Photographs or artwork enhance a Tweet, but may require a graphic artist to make that happen. Not everyone can write sharp, concise, compelling copy at the drop of a hat. You should carefully pre-select your team’s newsjacking producers.

If your organization takes days or weeks to approve a press release, newsjacking may not work for you. Without the empowerment to make quick decisions, you will likely miss the news cycle. Scott recommends input shortly after a story breaks, about the time reporters are looking for sources. If you’re late to the party, you’ll miss the dance.

Also, an organization could easily overreach by trying to respond to every breaking news story. Be wise about where you interject yourself by creating a short list of topics for which your organization has legitimate authority and available subject matter experts (SMEs).

Your SMEs must be smart, knowledgeable, articulate, media savvy and comfortable in front of a camera. Determine beforehand whether your potential SMEs are likely to be at ease with the media. If they are lacking confidence or experience, arrange for media training and coaching. Whenever possible, the CEO should be one of, if not your primary SME.

Your newsjacking tweets and press releases will land best with media contacts you’ve previously cultivated. They should already know about your organization’s mission and its experts.

Each day the communications team must monitor the news to know when a story breaks that relates to your organization’s mission. A slow response is no response, so move quickly to interject your organization and SMEs into the news with a tweet, statement, media advisory or press release. After your release, make your normal pitch calls to media contacts.

ICC has extensive experience with breaking news and newsjacking. We can help you develop and execute a newsjacking strategy. Call 704-759-6192 or email info@inchristcommunications.com to start the discussion.