by Palmer Holt
ebola, EBOLA crisis
Comments are off 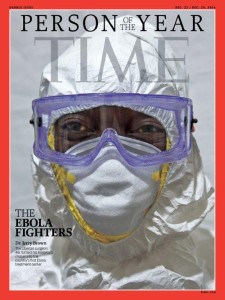 Nearly one year after the Ebola outbreak infected several Americans, InChrist Communications (ICC) continues to service media outlets around the world. Interest in the anniversary is building, and infections are rising again in West Africa.

During the height of the 2014 crisis, ICC client and mission agency SIM received 30,000 media mentions and placements, with an equivalent ad value of $300 million. Time magazine featured SIM doctor Jerry Brown on the cover of its “2014 Persons of the Year — Ebola Fighters” issue.

In May 2015, after 45 days of no new cases, Liberian health officials declared the country Ebola free. At least three new confirmed cases happened in late June and early July resulting in at least one death.

Patients are receiving treatment at the Ebola Treatment Unit on the grounds of SIM’s ELWA Hospital compound, in Monrovia, Liberia, which the Ministry of Health manages under the direction of Brown, a Liberian, who also serves as ELWA’s medical director.

Two Americans serving with SIM at ELWA contracted Ebola last year. Nancy Writebol of Charlotte, N.C., recovered at Emory University in Atlanta and has returned with her husband, David, to Monrovia. David is directing SIM’s work in Liberia, and Nancy is personnel coordinator. Dr. Rick Sacra of Holden, Mass., recovered at the University of Nebraska Medical Center in Omaha. He has returned to Liberia for short-term trips.

InChrist Communications can help your organization capitalize on breaking or coming news. You can learn more by visiting www.inchristcommunications.com or our Facebook page.