EASTON, Md. — As America’s churches face tough new COVID-19 restrictions on worship and gatherings, churches in one North African country have been totally closed down amid fears they might never be allowed to re-open. 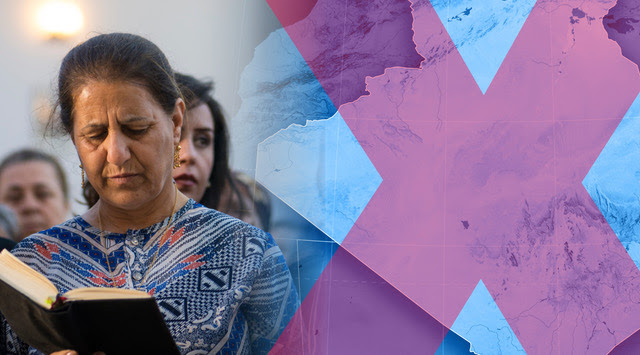 “What is happening to churches in Algeria is alarming and should alert us in America to be vigilant about our own religious freedoms that are even now on shaky ground,” said Rex Rogers, whose SAT-7 organization broadcasts the gospel across North Africa and the Middle East.

Authorities in Algeria — a nation that is less than one percent Christian — launched a wave of church closures late last year, culminating in a blanket ban on churches opening when the pandemic hit.

Following the closures last year, one congregation worshipped on the steps outside its locked building. In August, an Algerian court rejected another church’s appeal to re-open, setting a likely precedent and leading to fears that the closures could be permanent.

Across the U.S., sweeping new restrictions in many states — aimed at curbing the spread of the virus — limit the size of religious gatherings, outlaw choirs, prohibit congregational singing, and dictate stringent health protocols. In some states, churches failing to comply could be shut down.

“While we’re facing great uncertainty with new restrictions in the U.S., churches in Algeria are already shuttered and silenced,” said Rogers, president of SAT-7 USA (www.sat7usa.org), a Christian satellite television network that beams shows live into millions of homes across the region.

Algeria: The Future for America’s Churches?

“What we’re seeing in Algeria now could be the future for the church in America,” Rogers said. “The encouraging news is that God is on the move and he’s using new technology to bring people together and fulfill his promise to build his church.”

Prevented from worshipping together in their church buildings, Algeria’s Christians are turning to their televisions and online devices for spiritual support — their “only refuge” amid rampant job losses and anxiety about the future, according to SAT-7’s local coordinator Samia Kessai.

Thousands of Algerian believers are tuning into SAT-7 ARABIC’s new Rest in the Lord program in the local Kabyle dialect, and many more are looking to the network’s social media channels for encouragement and online community.

In recent months, SAT-7 has seen soaring engagement with its social media across North Africa and the Middle East. The network’s television programs have also experienced a surge in viewers as the pandemic has forced people to stay home.

“God’s will is not always clear to us,” a local presenter recently told viewers. “But his will is that we have a relationship with him, worship him, and seek him.”

PHOTO CUTLINE: SHUTTERED CHURCHES: As America’s churches face tough new COVID-19 restrictions on worship and gatherings, churches in Algeria have been totally closed down amid fears they might never be allowed to re-open. Thousands are turning to satellite television and online services for spiritual support, says Christian broadcaster SAT-7 (www.sat7usa.org).