RALEIGH, N.C. — A major new study reveals “an overwhelming majority” of donors don’t expect COVID-19 will curtail their charitable giving for the rest of the year.

But experts warned nonprofit organizations not to be complacent in their fundraising efforts, saying there will be “winners and losers” in the quest for donations. 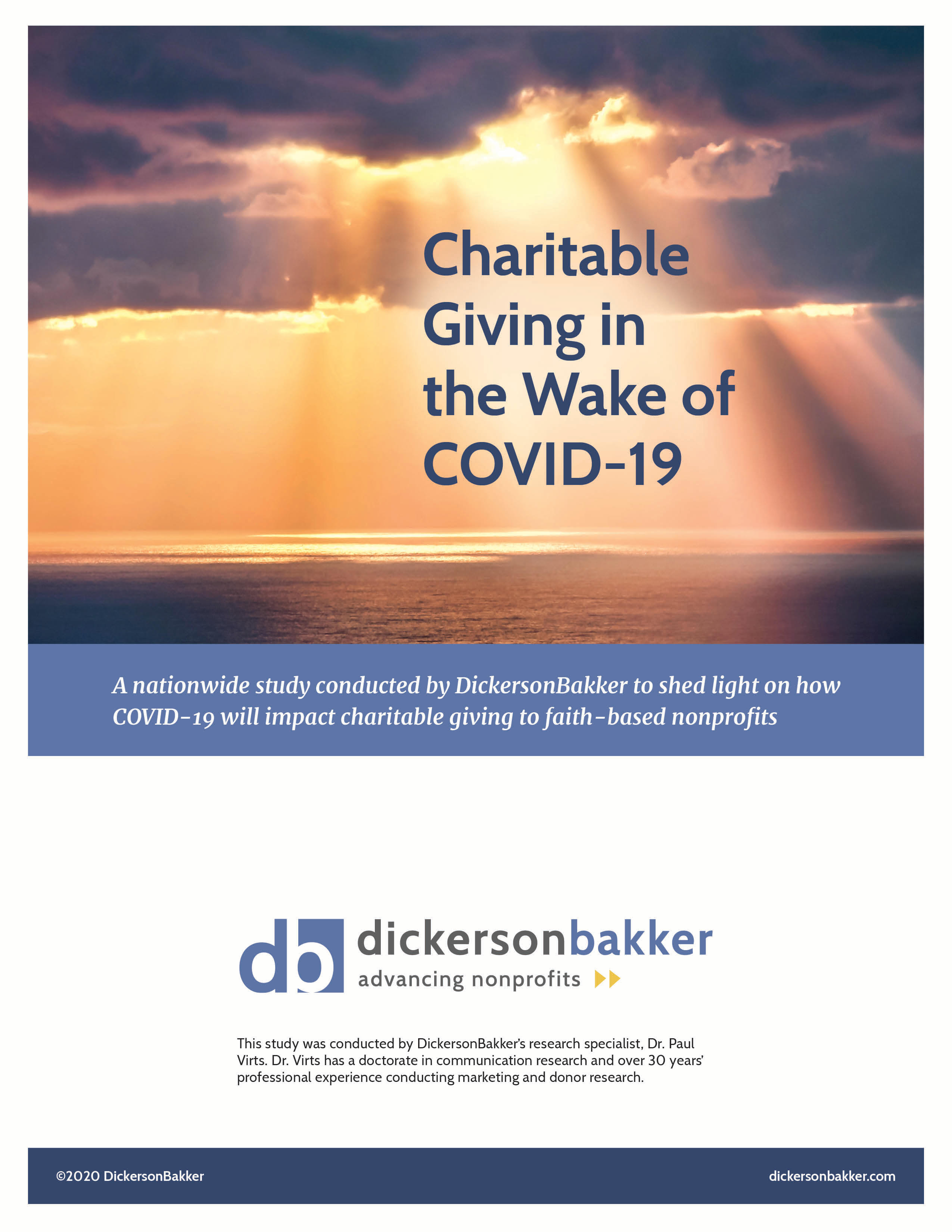 The comprehensive, nationwide survey of the giving intentions of 1,079 donors across 44 states was conducted from May 29 to June 22 by North Carolina-based consultancy firm DickersonBakker (www.DickersonBakker.com) in cooperation with some of America’s biggest faith-based nonprofit organizations.

According to the just-released report, 85 percent of the donors surveyed online expect the amount they give to charity to stay at last year’s level or increase in the second half of 2020.

The report — titled Charitable Giving in the Wake of COVID-19 — also has good news for nonprofit leaders concerned that the wave of giving to COVID-19 relief could result in a decline in gifts to their organizations. Fewer than one-in-10 donors plan to shift support to new or different causes because of the pandemic, and more than seven out of 10 who gave to COVID-19 relief consider those gifts to be “over and above” their regular giving.

“This study provides heartening news that should give nonprofit leaders the confidence they need to look beyond the shutdown and start making longer-term plans again,” said Martin.

The survey of mid-level and major donors — those giving anywhere from $1,000 to $1 million-plus per year — revealed six out of 10 expect their giving to stay the same as last year’s, and one-in-four expect to increase their charitable gifts in the latter half of 2020.

Only one-in-six donors expect to give less, and fewer than one-in-20 anticipate a substantial drop in their giving for the rest of the year.

“Of course, actual results will vary for each organization,” Martin said. “There are many variables in play, such as how effectively organizations engage their donors.”

Overall, U.S. donors appear to be optimistic about the economic recovery in the coming months, said Dr. Paul Virts, who headed the research, noting more than a third of those surveyed report their financial situation is better than last year.

“Nearly two-thirds expect the economy will rebound by the end of 2020 or by the middle of 2021 at the latest,” Virts said. “Only a small minority — nine percent — say they don’t expect the economy to recover to pre-pandemic levels for a very long time.”

The fall fundraising season — an important time of the year for nonprofits — will produce “winners and losers,” said Derric Bakker, president of DickersonBakker.

“In this environment donors are clearly being more vigilant in their giving, and nonprofit fundraisers who are complacent in presenting a strong case — or who are not attentive to donors’ needs — will likely pay a price,” he cautioned.

“Nonprofits that rely on major events will likely need to find other ways to raise money if they’re to meet their fundraising goals,” Bakker said.

On the positive side, approximately eight out of 10 donors expressed a willingness to meet one-on-one with fundraisers, or attend a small event at their church or in someone’s home, as long as social-distancing and other measures are in place.

Founded in 1985, DickersonBakker has been providing professional fund development consulting services to nonprofit clients for 35 years. With offices in Texas and North Carolina and full-time consultants living in several states, the firm has served hundreds of nonprofits — especially faith-based organizations — in the U.S., Canada, and overseas, focusing on mid-level and major giving.

PHOTO CUTLINE: ‘ON CUSP OF RECOVERY’: America’s faith-based nonprofits have received a boost from a major new national study that reveals “an overwhelming majority” of donors don’t expect COVID-19 to cut back their charitable giving this year. The survey conducted by consultancy firm DickersonBakker (www.DickersonBakker.com) in cooperation with major faith-based organizations — titled Charitable Giving in the Wake of COVID-19 — follows a nationwide poll of more than 1,000 mid-level and major donors, mostly regular church attenders.