LA MIRADA, Calif. — Radio ministry FEBC (Far East Broadcasting Company, www.febc.org), today announced plans to build a new radio station next year that will broadcast local Christian programs for the first time to thousands in a remote area of Cambodia,  where one of several “killing fields” took place in the 1970s. 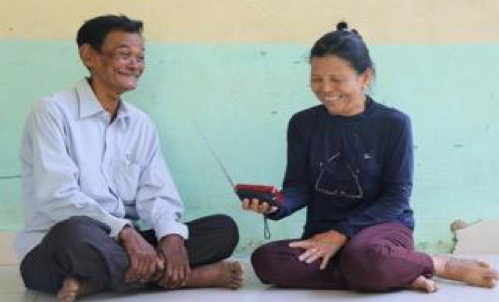 The new station will be built in Battambang province – in the far northwest of the South Asian country bordering Thailand – and will have the capability to reach 750,000 people who have had little or no exposure to the gospel.

Cambodia – infamous for the Khmer Rouge “killing fields” genocide– is predominantly Buddhist, with Christians a growing minority representing three percent of the 15-million-strong population, according to Operation World, the “missions bible.” Since 2002, FEBC’s gospel-focused FM broadcasts in the native Khmer language have introduced thousands from the “post-genocide generation” to Christ.

“What were once the ‘killing fields’ are becoming the fields of harvest,” said Ed Cannon, president of FEBC. “When you visit, as I recently did, you can feel the darkness and despair still present.  But now hope is on the horizon.”

From 1975-1979, dictator Pol Pot’s Khmer Rouge communist regime tortured and executed up to two million people in a bloodbath known as the “killing fields,” because tens of thousands were massacred in the rice fields.

“Almost every adult lost someone – father, mother, grandparent, even children,” Cannon said. “Survivors have marched on through life, many leaving their own legacy of poverty, violence, substance abuse, and suicide. The gospel is the only way to heal their shattered lives, and radio is a powerful way to reach them and the next generation. The new radio station will help heal the deep wounds of many Cambodians who still suffer from the aftermath of the genocide.”

In parts of the country where FEBC already broadcasts, those desperate for hope are responding as they hear the “good news” in their own language, broadcast by the organization’s indigenous radio hosts.

“I came across FEBC by accident when tuning my radio,” said one listener. “I was touched by a song I heard – it said God loves us and is with us when we’re alone. I started listening regularly… I’m so joyful because I finally found out who God is.”

Other listeners say the Christian messages have changed their attitude towards others, increasing their compassion for their neighbors. “I was aggressive and fierce but, after I received Christ, God transformed my life,” said villager Por Rith, who described the radio shows as “good medicine for my life… it makes me hopeful and (helps me) love my neighbor.”

Celebrating 75 years of ministry next year, FEBC now broadcasts in 50 countries around the world every day, using a network of 265 radio stations and transmitters capable of reaching four billion people in major cities and remote villages. In the developing world, radio is still the most effective way to communicate the gospel. FEBC estimates 3.6 billion people worldwide rely on radio as their primary means to get information – a huge potential audience.

“So many precious souls in Cambodia are trapped in superstitions and spiritual darkness,” Cannon said. “We’re grateful for those who share our vision to reach all those who’ve never heard the good news of Jesus Christ.”

FEBC (Far East Broadcasting Company, www.febc.org) was founded in 1945 to share the gospel in China. Today, more than 900 staff and 1,800 volunteers produce 842 hours of programming each day, broadcasting across Asia, Russia, Ukraine, the Middle East and Africa. Programs in 124 languages air from 265 stations.

PHOTO CUTLINE: VOICE TO THE UNREACHED: Radio ministry FEBC (www.febc.org) has announced plans to build a new radio station next year that will broadcast Christian programs for the first time to thousands in a remote area of Cambodia, where the infamous “killing fields” genocide took place.