EASTON, Md. — The most influential female Christian media personality in the Middle East and North Africa is coming to America next week — and will share in-person how the latest “uncensored” technology is powering the gospel in nations like Iran and Afghanistan. 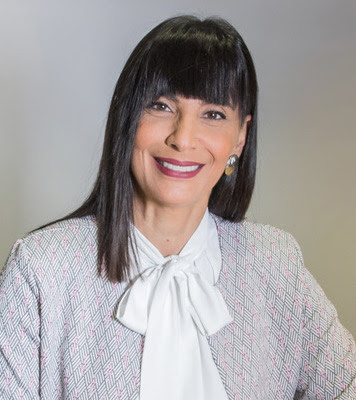 Rita El-Mounayer — a native of Lebanon and CEO of Christian Middle East/North Africa (MENA) media ministry SAT-7 (www.sat7usa.org) — will be a presenter at the National Religious Broadcasters (NRB) Christian media convention in Grapevine, Texas, June 21-24. El-Mounayer will speak June 21 at 4 p.m. on the topic of “the Great Commission in the MENA” and June 24 at 2 p.m. on the topic of digital media innovations. She’s also scheduled to hold a press conference June 22 at 11 a.m.

A 25-year veteran and pioneer of Christian television in one of the most volatile regions in the world, El-Mounayer — who has a Master’s degree in communications from the University of Wales in the UK — has helped lead SAT-7 into the digital era, this year launching the Middle East’s first Christian on-demand video streaming platform, broadcasting in Arabic, Turkish and Farsi.

At NRB, the engaging CEO — who began her SAT-7 television career as a writer and a on-air children’s presenter — will talk about how on-demand video and social media platforms, such as WhatsApp and Telegram, are propelling the gospel through smartphones and other digital devices uncensored across the Middle East and North Africa.

On behalf of SAT-7, El-Mounayer and SAT-7 founder and former CEO Dr. Terence “Terry” Ascott will receive the NRB’s International Media Award for 2021 — one of the coveted annual Media and Special Service Awards presented to Christian organizations that “spread the gospel with the greatest effect.”

Based on the Mediterranean island of Cyprus, off the coast of Lebanon, El-Mounayer knows what it’s like to live in a region where conflict and volatility is part of life. She grew up in Lebanon in the 1980s during the country’s civil war — watching cartoons on television with her sister while rockets exploded around them.

Her visit to the U.S. comes as SAT-7 this month marks its 25th anniversary on the air in the Middle East and North Africa — a remarkable media journey chronicled in a new book Dare to Believe! authored by Ascott who has a book-signing event at NRB June 24 at 2 p.m.

A Vision For Kids, Isolated Believers

Joining SAT-7 soon after its launch 25 years ago, El-Mounayer quickly rose through the ranks, presenting the flagship children’s program Bedtime Stories and going on to head the network’s children’s and Arabic programming. In 2007, her vision and drive supported the launch of SAT-7 KIDS, the first independent Arabic Christian channel for children. She also spearheaded the network’s educational programs targeting Syrian refugee children and their parents in Lebanon.

Since taking over as CEO in 2019, one of El-Mounayer’s priorities is to encourage isolated Christians in places like Iran, Turkey and Algeria, where they’re often unable to attend church, many don’t have a Bible, and some have never met another believer in person.

“SAT-7 is the church for the thousands of believers across the Middle East and North Africa who have to worship alone in secret in their homes,” she said. “One viewer in Iran told us, ‘when you pray on the screen, I pray with you; when you worship on the screen, I worship with you. One day I will pray and worship with you in person. I will kneel down and wash your feet and say thank you for what you did for the church in Iran’.”

Under El-Mounayer’s leadership during the pandemic, the network — which anyone can watch free-of-charge 24/7 — has seen a surge in responses and social media posts from viewers across the Middle East and North Africa.

Launched in 1996, SAT-7 (www.sat7usa.org) — with its international headquarters in Cyprus — broadcasts Christian and educational satellite television programs and online media to 25 million viewers in the Middle East and North Africa. Its mission is to make the gospel available to everyone, and support the church in its life, work and witness for Jesus Christ. SAT-7 broadcasts 24/7 in Arabic, Farsi (Persian) and Turkish, using multiple satellite channels and online services.

PHOTO CUTLINE: VISIONARY FEMALE MEDIA CEO TALKS MIDDLE EAST MINISTRY: The most influential female Christian media personality in the Middle East and North Africa is coming to America next week — and will share in-person how the latest “uncensored” technology is making the gospel available in nations like Iran. Rita El-Mounayer — a native of Lebanon and CEO of SAT-7 (www.sat7usa.org) — will be at the National Religious Broadcasters (NRB) Christian media convention in Grapevine, Texas, June 21-24.