LOVES PARK, Ill. – Heartbroken refugee women and children are saying a tearful goodbye to their husbands and fathers at the Ukrainian border, but local churches are coming to the families’ aid.

“Many Ukrainian families are being separated at the border,” said Eric Mock, vice president of ministry operations at Slavic Gospel Association (SGA, www.sga.org). “Just the moms and kids are getting through. Dad is going back to defend. The kids are realizing they may never see their father again.” 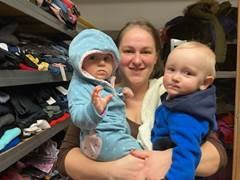 The Illinois-based organization has launched an emergency aid appeal. It is partnering with hundreds of local evangelical churches not only in Ukraine, but also Russia, Georgia, Poland and other neighboring countries where refugees are fleeing in the thousands.

In Poland – where officials expect 400,000 Ukrainian refugees – churches are on the frontlines of the emergency response, replacing their pews with temporary beds to shelter displaced families. SGA supports about 90 churches in Poland that are feeding and caring for desperate refugees.

The organization’s established network of local churches is a ready-made relief force, distributing food, blankets, warm clothes and medicines to those who’ve fled their homes and villages with nothing. The U.N. said up to 4 million refugees could flee the Ukraine-Russia war zone.

Hope in the Fray

“In the midst of the fray, these local pastors and believers are caring for people they’ve never met before,” Mock said. “There’s brokenness, but there’s also hope, because God is at work through these faithful pastors and their congregations.”

Families and churches on both sides of the Ukraine-Russia border are interconnected, and believers across Russia are praying for those suffering in Ukraine. “Underlying this tragedy are people in Ukraine, Russia, Belarus and other surrounding nations who are trying to make sense of this,” Mock said.

In Chernobyl, northern Ukraine – in the 1980s, site of the world’s worst-ever nuclear disaster – abandoned and orphaned children were frightened and confused as Russian tanks rolled into the area.

“They’ve lost their parents, and now they have no idea what’s going to happen to them,” said Mock. “They just know they’re alone.”

Through its Orphans Reborn program, SGA supports a grassroots network of evangelical churches bringing aid and the Gospel to abandoned children across Russia and Ukraine, including Chernobyl’s “radiation zone.”

“How do you explain the war to them? Right now, these children are traumatized and looking to us to help them,” Mock said.

Founded in 1934, Slavic Gospel Association (SGA, www.sga.org) helps “forgotten” orphans, widows and families in Russia, the former Soviet countries of Eastern Europe and Central Asia, and Russian-speaking immigrants in Israel, caring for their physical needs and sharing the life-transforming Gospel of Jesus Christ. SGA supports an extensive grassroots network of local evangelical missionary pastors and churches in cities and rural villages across this vast region.