RALEIGH, N.C. — A new report on America’s multi-billion-dollar nonprofit fundraising industry suggests it is on the brink of a staffing crisis that could affect millions of people.

America’s 1.5 million-plus charitable organizations face a “severe shortage of qualified fundraisers” that could seriously restrict their efforts to raise critically needed funds — and impact millions of people served by them, the report says. 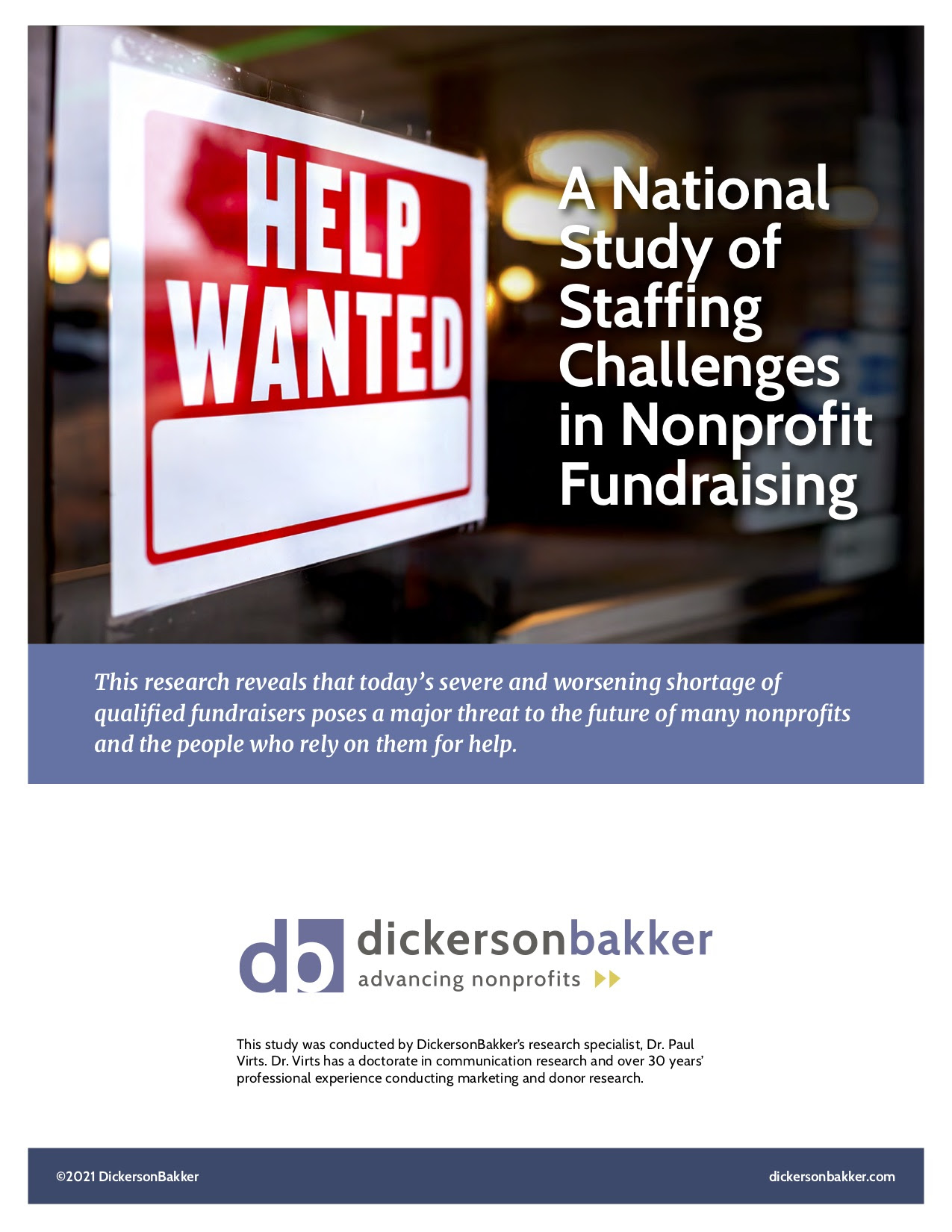 “Giving is the lifeblood that nourishes the work of nonprofits in this country,” said Derric Bakker, president of consultancy firm DickersonBakker (www.DickersonBakker.com) that conducted a comprehensive nationwide survey of nonprofit leaders and fundraising professionals. “Quality fundraisers are vital to keeping these organizations healthy and growing.”

America’s nonprofit fundraising industry is colossal. Total charitable giving from all sources totaled nearly $450 billion in 2019. The sector contributes approximately a trillion dollars to the US economy each year, which amounts to almost 6 percent of total GDP.

With demand for talented fundraisers outstripping supply, recruitment will “almost certainly only get worse as the economy improves” post-pandemic, says the North Carolina-based agency’s report, cautioning that “good fundraisers are extremely hard to come by.”

Nonprofits need to be “more creative and deliberate” about growing their talent pools by searching for cause-driven professionals with experience in related fields such as sales and marketing, the report suggests.

“This may be the first study to show real correlation between CEO engagement and overall fundraising performance,” says the report. “Most CEOs don’t come into their roles with much fundraising experience. Many find it a challenge.”

The report continues: “(Nonprofit organizations) would be well-advised to invest in providing their CEO with training and coaching to help them become more effective in fundraising.”

The full report can be viewed at https://dickersonbakker.com/nonprofitstaffingstudy/.

Founded in 1985, DickersonBakker has been providing professional fund development consulting services to nonprofit clients for 35 years. With offices in Texas and North Carolina and full-time consultants living in several states, the firm has served hundreds of nonprofits — especially faith-based organizations — in the U.S., Canada, and overseas, focusing on mid-level and major giving.  The company also runs an executive recruiting division.

PHOTO CUTLINE: NONPROFITS FACE ‘SEVERE’ THREAT TO FUNDRAISING EFFORTS: A new report on America’s multi-billion-dollar nonprofit fundraising industry suggests it is on the brink of a staffing crisis that could impact millions of people. A “severe shortage of qualified fundraisers” could seriously affect donations, says the report (https://dickersonbakker.com/nonprofitstaffingstudy/) by DickersonBakker (www.DickersonBakker.com).